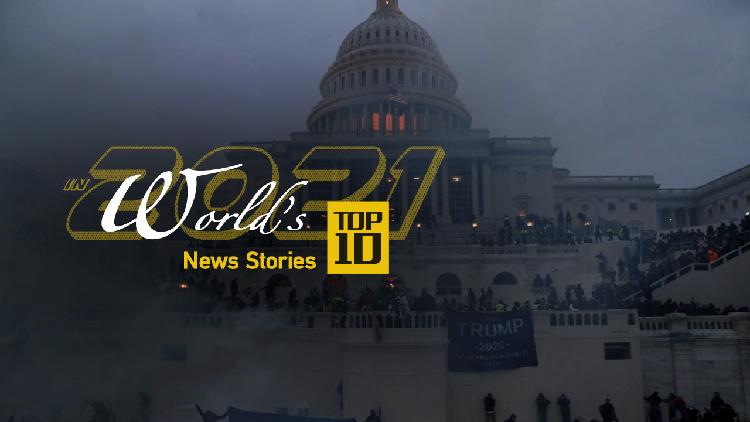 China Media Group (CMG) has selected the Top 10 Global Stories in 2021. Here is a recap of the events that made the year extraordinary.

Chinese President Xi Jinping proposed the Global Development Initiative in his speech to the 76th session of the United Nations General Assembly via video link in September. The plan sets the course for international development.

In 2021, 50 years after the People’s Republic of China restored its rightful seat at the UN, the country pledged to promote multilateralism and build a community of shared future for humanity, in a time of crisis and great uncertainties.

Over the past year, Xi has attended a series of international meetings and offered China’s solutions to major global issues, including global governance, pandemic control, economic recovery, and climate change.

2. The challenges of C0VID-19 continue

As of December 24, there were more than 276 million cases and 5.37 million deaths from the COVID-19 pandemic worldwide. The Omicron variant has spread to at least 110 countries and regions.

The World Health Organization estimates that 8.6 billion doses of COVID-19 vaccines had been administered worldwide as of December 23. However, there has been a serious disparity in vaccine distribution between rich and poor countries.

Meanwhile, hoarding of vaccines and attempts to politicize the search for the origins of the virus by some developed countries are hampering the fight against the pandemic.

China has supplied more than 2 billion doses of COVID-19 vaccine to more than 120 countries and international organizations, making it the world’s largest vaccine donor.

WHO chief Tedros Adhanom Ghebreyesus speaks to media about the coronavirus and WHO’s global health priorities for 2022, at a new press conference in Geneva, Switzerland, on 20 December 2021. / CFP

WHO chief Tedros Adhanom Ghebreyesus speaks to media about the coronavirus and WHO’s global health priorities for 2022, at a new press conference in Geneva, Switzerland, on 20 December 2021. / CFP

In 2021, China and Russia continued to deepen their comprehensive strategic coordination partnership for the new era.

In May, the two countries launched a joint nuclear power project. In June, Chinese President Xi Jinping and his Russian counterpart Vladimir Putin extended the treaty of good neighborliness and friendly cooperation. The two leaders held a virtual meeting in December.

This year, China-Russia bilateral trade reached an all-time high, while cooperation in the fields of energy and scientific and technological innovation is steadily advancing.

China and Russia to deepen their cooperation in 2021. / CFP

China and Russia to deepen their cooperation in 2021. / CFP

4. Challenges and opportunities for Afghanistan after the US withdrawal

In August, the United States hastily withdrew its troops from Afghanistan, ending a 20-year war.

Throughout this war, more than 100,000 Afghan civilians are believed to have been killed or injured by foreign forces and tens of millions displaced. But the United States has failed to contain terrorism or successfully implant a Western model of government in the country.

All of this has left Afghanistan with a deteriorating security situation, a collapsing economy and a growing humanitarian crisis.

A US soldier with a gun tells Afghans to leave the airport while US troops are evacuated from Kabul. / CMG

A US soldier with a gun tells Afghans to leave the airport while US troops are evacuated from Kabul. / CMG

The US and European economies have experienced record inflation amid the global pandemic and a series of stimulus measures.

In November, the US consumer price index jumped nearly 7% year-on-year, a record high in 39 years, according to the US Department of Labor.

The US and European economies are experiencing high levels of inflation this year. / CFP

The US and European economies are experiencing high levels of inflation this year. / CFP

6. Russia draws a “red line” with the United States and NATO

Russian President Vladimir Putin has warned of a quick and serious response if the West crosses its “red line” during a state of the nation address in April.

In December, Moscow formally asked the United States and NATO to guarantee that they would not expand their military capabilities eastward and threaten its western border.

Tensions between Russia and Western countries escalated in 2021, as the United States and its NATO allies announced new sanctions and the extension of old ones against Moscow over alleged EU rights issues. man, Ukraine and the Nord Stream-2 pipeline project.

Tensions between Russia and Western countries are mounting. / AFP

Tensions between Russia and Western countries are mounting. / AFP

7. Riot at the United States Capitol

On January 6, supporters of outgoing President Donald Trump stormed the U.S. Capitol in an attempt to halt the transition to power.

The riot, which left five dead and hundreds more injured, was the most serious violent attack on the government institution since 1814.

A major crisis for American democracy, the riot led to the ban on the social networks of politicians, including Trump. It also raised questions about double standards by law enforcement across the country, which were said to have been harsher on Black Lives Matter protesters before.

Police use tear gas around the Capitol where pro-Trump supporters revolted and raped the Capitol in Washington, DC, United States, Jan.6, 2021. / CFP

Police use tear gas around the Capitol where pro-Trump supporters revolted and raped the Capitol in Washington, DC, United States, Jan.6, 2021. / CFP

8. Nuclear threats from the AUKUS pact, wastewater from Fukushima

As part of the new pact, Australia will acquire nuclear-powered submarines, after having reneged on a previous contract with France. This sparked widespread international opposition and concerns over the violation of the Nuclear Non-Proliferation Treaty.

Separately, Japan announced that it would dump nuclear wastewater accumulated in the crippled Fukushima nuclear power plant following the 2011 earthquake and tsunami. Although Japan insisted that the wastewater has safe and treated, the move met overwhelming opposition from the international community.

In October, the first phase of the 15th meeting of the Conference of the Parties (COP15) to the United Nations Convention on Biological Diversity was inaugurated in the Chinese city of Kumming, where countries adopted the “Kunming Declaration” calling for to act to slow the loss of biodiversity.

Environmental issues are in the spotlight in 2021 during COP15 and COP26. / CFP

Environmental issues are in the spotlight in 2021 during COP15 and COP26. / CFP

At the Tokyo Summer Olympics, held in July after a one-year delay due to COVID-19, a new currency for the games debuted that reads “Faster, higher, stronger – together”.

The International Olympic Committee (IOC) unanimously approved the addition of “together” after the original three-word motto to emphasize the importance of unity.

In December, the 76th session of the United Nations General Assembly adopted an Olympic Truce resolution co-sponsored by 173 member states ahead of the Beijing 2022 Olympic and Paralympic Winter Games in February and March 2022.

On December 11, the 10th Olympic Summit underlined the importance of the political neutrality of the games and denounced the attempts to politicize sporting events.

As the role of the office recedes, companies are investing their real estate savings in remote working