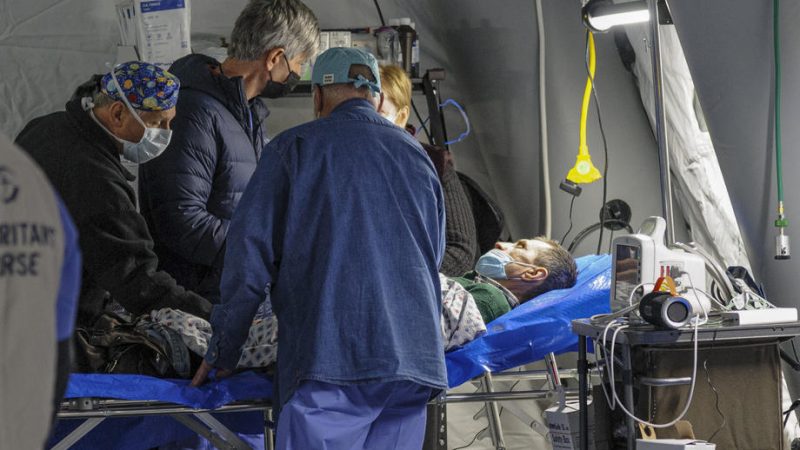 While most humanitarian corridors are closed, a nonprofit European health organization is providing online training to Ukrainian doctors to help them deal with the wave of casualties from the conflict.

At the start of the Russian invasion, Ukrainian doctors told Professor Maurizio Cecconi, President of the European Society of Intensive Care Medicine (ESICM), that they needed medical supplies, to open humanitarian corridors and to digital training.

However, since there is no safe access to the corridors, it is almost impossible to send medicines, supplies and medical devices or to transfer patients in intensive care units (ICUs) from Ukraine to neighboring countries.

“That’s the biggest problem. We would like to send more aid but the humanitarian corridors are blocked, so it’s not easy,” Cecconi told EURACTIV.

On Friday April 1, a humanitarian corridor was opened in the city of Mariupol, allowing 3,000 people to leave the city. But this remains an exception.

For security reasons, NGOs and the Ukrainian army were unable to use most of the humanitarian corridors. On Monday evening, the International Committee of the Red Cross was released after being detained by police in an area under Russian control during the day. Other existing humanitarian corridors lead only to Russia or Belarus.

In order to help healthcare professionals still working in Ukrainian hospitals, ESICM has set up online training to teach resuscitation.

Since the start of the war, the ESICM has organized one training session per week which can be tracked for free, aiming not only to intensive care experts but also front-line workers who help intensive care teams, such as cardiologists.

Many health workers from other departments have joined the intensive care units to support the teams, but they do not always have the skills to take care of patients who urgently need them. During a virtual marathon organized last week, the association looked into the care of a patient injured by chemicals or an explosion.

“We offer them tailor-made training because intensive care doctors are very busy and do not have time to train others,” Cecconi explained. During the first weeks of the conflict, about 200 intensive care workers completed the online training.

“It is very important to know how to treat these patients and how to warm them up,” the ESICM president told EURACTIV.

“It’s not just about the urgency of the war”

If the humanitarian corridors were opened, medical supplies, devices and medicines could be sent, as well as patients transferred out of Ukraine to receive urgent healthcare.

Although there are Ukrainian patients in intensive care units in Europe, it is a tiny minority and there are no official figures at the moment.

“It’s not just about the war emergency, but some cancer patients need an operation and maybe they need to be in intensive care after the operation.”

Refugees traveling with chronic illnesses may not have access to their treatments for a few days. “We can see diseases that we did not see before simply because we stop a treatment”, warns Cecconi, giving the example of a diabetic patient not taking insulin: “it is an emergency that sometimes you have to check in intensive care”.

Another danger is that traveling groups are more exposed to serious infections due to lack of water and food, low temperatures and poor sanitary conditions. “The fact that you move around in poor conditions puts you more at risk of infection, not just COVID,” Cecconi said.

“People in bomb shelters breathe in fungal spores and if they have chronic illnesses, these often get worse. Sometimes they arrive with prolonged illnesses, such as pneumonia, kidney infections and severe allergic reactions,” an infectious disease specialist currently working in Ukraine told the World Health Organization.

Since Russia invaded Ukraine, more than 4.2 million people have fled the country. This has led to two separate health crises, Cecconi said. “One is inside Ukraine and the other is this moving refugee crisis.”

“We have to be ready for this in Europe and that is why together with society we are now investing heavily in education and training,” he continued.

10,000 beds for refugees in European hospitals

During a webinar organized by the European Commission, the ESICM stressed that as soon as the corridors open, the sickest patients must be prioritized.

“We have built a solid collaboration during [the COVID-19 pandemic] with DG SANTE of the European Commission and WHO,” said Cecconi.

On March 8, the Commission announced that 10,000 beds had been made available in hospitals in Europe to accommodate Ukrainian refugees in need of care.

“There are thousands of people fleeing Ukraine who need urgent treatment and care. This includes victims of the conflict and people requiring continuity of care, such as cancer patients,” said Health and Food Safety Commissioner Stella Kyriakides.

“They have operated at times without electricity. They were using their phones during an operation,” Cecconi said. “We are learning from them because they are facing a very difficult situation, it is unlike anything we have ever seen in Europe,” he concluded.