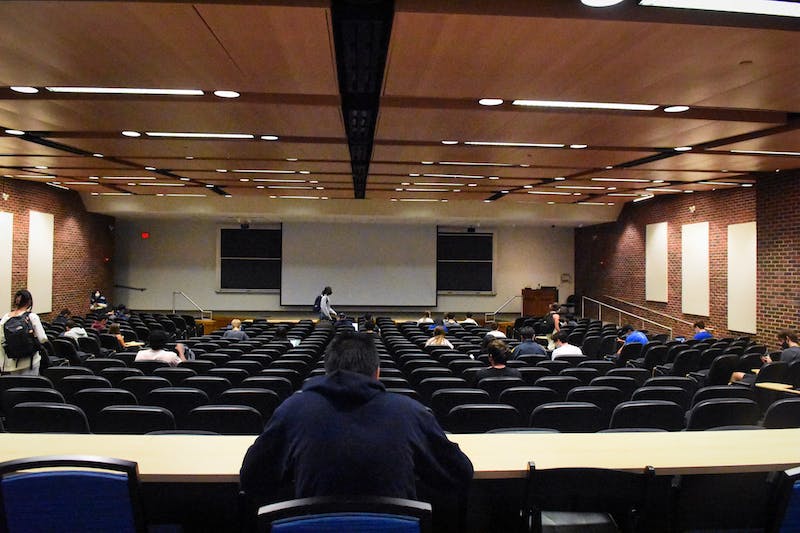 A petition calling on Penn to move the finals online in light of the recent spike in COVID-19 cases on campus has garnered more than 500 signatures.

The petition was started last week by an account titled “Anonymous Student” and is directed to “University of Pennsylvania faculty and department chairs.” The University announced Thursday that it will ban all indoor social gatherings for the remainder of the semester following a spike in COVID-19 cases on campus over the past week.

The petition calls for final exams for large lectures to be moved online, citing several grievances with the application of the PennOpen Pass self-report system and difficulties with social distancing in classrooms.

“[M]all students who claim to have green passes are often forged or copied or screenshots. When building security doesn’t do a thorough check, there are different ways to get a red pass, such as simply incorrectly reporting your symptoms, ”the petition states.

The petitioner also wrote that the seating positions in most exams for large classes only allow about two feet of space between students.

University spokesman Stephen MacCarthy told the DP that the increase in positive COVID-19 cases in the Penn population is mainly linked to social gatherings inside. He added that there are still no documented cases of transmission in the classroom or in the workplace where people are masked.

“With almost 95% of the undergraduate population having taken tests in the past two weeks, we have our highest level of compliance with the bi-weekly testing requirement as we move on to final exams,” MacCarthy wrote in a press release emailed to the DP. “Public health and safety remains our top priority and we will continue to monitor any new development. ”

According to Dubé, 133 community members tested positive between December 6 and 8, more than the total of 120 cases the week before. The vast majority of the new cases – most of whom were undergraduates – were linked to parties and other large indoor social gatherings.

Junior engineer Arjun Shukla said he signed the petition because he had three in-person exams this semester and was concerned about the potential spread of COVID-19 by passing them.

Shukla, from India, has not returned home to see his family for a year. He plans to return home during the winter break, but with the outbreak of COVID-19 cases in Penn, he is concerned about bringing the virus back to his family in India.

“Penn has already taken the liberty of shutting down in-person social events lately,” Shukla said. “I think they should really be completely transparent and go all the way and also make sure that all other activities are also fully online, in order to minimize the number of cases that could potentially come up.”

College sophomore Charlie Schumer echoed Shukla’s sentiments. Although Schumer does not have any in-person exams this semester, he said he signed the petition due to his concerns about the spread of COVID-19, especially for students planning to return home for the summer vacation. winter that need a negative test.

Like Schumer, College junior Adedotun Bello said that while he does not have in-person exams for major lectures, he was concerned that those in-person exams could help the spread of COVID-19 on campus. Bello said several of his friends who are in larger conference classes have noted that distancing is often not possible and that mask policies are not always enforced.

Receive our newsletter, Dear Penn, delivered to your inbox every morning of the week.

Bello added that he thinks it’s especially important to keep COVID-19 cases low as people prepare to go home at the end of the semester, given that students could potentially pass on the disease. viruses to immunocompromised family members when traveling.

Schumer is concerned that students who miss in-person exams due to COVID-19 exposure or a positive test may now be required to take the in-person exam at the start of the spring semester if an online final is not not an option.

“I think it was a choice that was not made in the best interests of the students,” Schumer said.