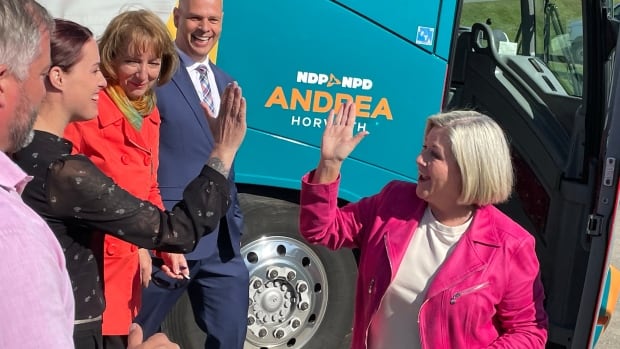 Health care was at the center of the Ontario NDP’s platform for the North, with promises to hire 300 doctors in Northern Ontario and improve the travel grant for health in the North.

Ontario NDP Leader Andrea Horwath unveiled the platform Monday in Sudbury, Ont., along with several of the candidates from parties in northeastern Ontario.

“We need to fix the things that are broken, like our healthcare system,” Horwath said. “We have to give hope that the North can have a strong future.”

She said the NDP would create more incentives for doctors and their families to move to Northern Ontario. This would involve ensuring that their spouses also have the opportunity to work in the area, as well as access to good schools, hospitals and communities.

France Gélinas, NDP candidate in Nickel Belt, said there is a great need for family doctors in Northern Ontario and the demand for specialists varies by region.

“The Timmins Hospital needs more cardiologists,” she said. “The Sault Ste. Marie hospital, I think the last time they spoke to me was more orthopedic surgeons.”

The party’s northern platform said an NDP government would bring 100 specialists to the north, along with 40 mental health practitioners.

Since many northerners travel to southern Ontario for specialized medical care, Horwarth said his party will guarantee those people reimbursement of their travel expenses within 14 days.

Gélinas added that the fares paid by the Northern Health Travel Grant have not been updated for about 12 years.

“The cost of gas, the cost of accommodation in Toronto and Ottawa, where most people go, has gone up a lot, and none of that has been taken into account,” she said. declared.

Addressing the opioid crisis in northern Ontario was also a key part of the platform.

“I’ve spoken to so many mayors, so many representatives from northern communities who are just beside themselves with what’s going on with the opioid emergency, the opioid crisis,” Horwath said.

She said a New Democrat government would not put a cap on the number of safe consumption and treatment sites in the province.

Laurentian “back on solid ground”

On education, Horwath said she would restore confidence in Laurentian University in Sudbury, which announced it was insolvent in February 2021. In April, the university cut 69 programs and laid off nearly 200 staff and faculty members.

The platform said it would also support the University of Sudbury, which plans to become an autonomous French-language institution in northern Ontario.

Over the weekend, Ontario Progressive Conservative Leader Doug Ford made campaign stops in Sault Ste. Marie and Timmins, where he promised to invest more in Ontario’s essential mining and transportation strategy.

Ford said it would commit $1 billion to build a road to the mineral-rich Ring of Fire, about 500 kilometers north of Thunder Bay.

He also pledged $75 million to restore Northlander passenger rail service between Toronto and Timmins and to rebuild Highway 101 in the northeastern Ontario city.

The NDP’s North Platform has also promised to restore Northlander service and connect it to the Polar Express in Cochrane.