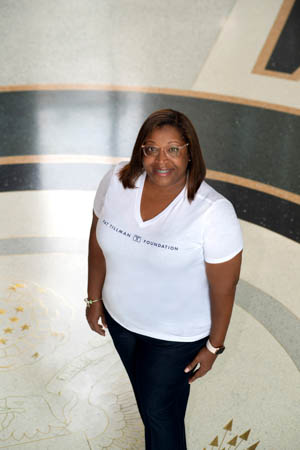 The Pat Tillman Foundation has selected Fabersha Flynt, a doctoral student in higher education administration at the University of Southern Mississippi (USM), as one of 60 U.S. service members, veterans and military spouses who make up the 2021 Tillman Scholars cohort. .

Established in 2004 by friends and family of former Arizona Cardinals goaltender turned U.S. Ranger Pat Tillman, the day after his fratricidal death in Afghanistan, the Tillman Scholars program is a network of over 700 United leaders. by their military service, their academic passions and their desire. have an impact through service. Among thousands of talented applicants, Flynt’s compelling story of sacrifice, determination and potential caught the attention of the selection committee and captured their hearts. She is the first Tillman Fellow to represent USM and one of the few surviving spouses to have participated in the scholarship program to date.

Flynt’s journey to becoming a doctoral student at USM and Tillman Scholar involved some of life’s biggest and deepest ups and downs, but she finds purpose in every experience and motivates herself to keep moving forward. . When meeting Flynt, his humble confidence, joie de vivre and intellectual curiosity are evident. Her bubbly demeanor and cheerful demeanor contrast sharply with the dark seasons she has endured.

In 2004, Flynt was in Mississippi Graduate School to pursue his Masters in History. His goal was to get his doctorate. and become a university professor. Reading and writing filled her days between her visits to historically significant sites in the South for her research on African American women’s studies. Focused on achieving her educational and professional goals, she never imagined that a quick trip during spring break that year would change her life.

While waiting for his flight at Jacksonville International Airport, Flynt ran into U.S. Army Staff Sargent Bryan A. Lewis. She remembers him as a gentle giant with a great sense of humor that immediately won her over. After exchanging phone numbers and breaking up, the strangers continued to converse over phone calls that lasted for hours. Their chemistry was natural and their friendship blossomed. A year later, they got engaged, then married in August 2005. Their fairytale ending seemed to be on the horizon.

In previous years, March has kept some of Flynt’s favorite memories: meeting Lewis in 2004 and proposing in 2005. But in 2006, it marked a series of events that shook her deeply. March 13, 2006 is a day she will never forget. While serving in Operation Iraqi Freedom, Lewis was killed by a roadside bomb near Rustamiyah. After talking on the phone that morning, the news seemed too horrible and too unbelievable to be real. It wasn’t until Lewis’s body was brought back to American soil and buried in his hometown of Bunkie, Louisiana, that the unbearable reality of his loss really began to set in.

Over the weeks, months, and years that followed, Flynt struggled with denial and bouts of depression and anxiety. The pain pulled him into his shell, and his urge stagnated. The same woman who once aspired to earn the title of “Dr.” struggled to find the ambition to return assignments in a third master that she was pining for. His past seemed like an alien to him and the future looked bleak without Lewis by his side.

By reaffirming his faith in God, Flynt was able to overcome his loss and rediscover his purpose. She created a scholarship through her church in memory of her late husband and founded an education consulting company aimed at helping higher education institutions foster learning environments that value diversity and inclusion for marginalized students. While a career in higher education had always interested her, part of her passion changed as she went through her grief and reassessed the course of her future.

“My pain developed my goal of teaching and leading others to a place of comfort, a place where their dreams can come true and impact the world,” Flynt said. “I used to want to change parts of my story, but now I understand that each step has played a unique role in my preparation to serve others. Having gone through my struggles, I am now on a mission to help traditionally underserved and underrepresented students pursue their educational goals.

Spring 2021 marked 15 years since Sgt. Lewis’s passing, and something about that milestone was different for Flynt. As the anniversary approached, she made up her mind not to let another day pass when she was idle. “The time has come. Now is my time,” she said to herself. In March 2021, feelings of inadequacy and doubt dissipated when she was notified of her acceptance to USM School of Education, and in June, the Pat Tillman Foundation contacted her to welcome her into the scholarship program.

“My eyes are on the Tillman Scholars program and I got my PhD a few years ago, but I found it hard to believe in myself. Looking at the long list of bright and accomplished academics, I wondered if I was worthy of this honor and capable of succeeding in a rigorous doctoral program, ”said Flynt. “Everything changed when I realized it wasn’t a competition. The Pat Tillman Foundation wants academics to form a community that works together to change the world, just like USM. Once I got out of my own way it all started to fall into place, and I think Bryan would be so excited to see where my path leads.

Flynt started her graduate courses at USM in the fall of 2021 and is working towards her graduation by the spring of 2024. Through synchronous online classes offered in the evenings, she is able to ” learn from experienced Southern Miss professors about the structure, funding, legal issues, staffing and administration of higher education institutions while retaining her position as Director of the Walton County Campus for Technical College of ‘Athens in Georgia.

She looks forward to working with her advisor and other qualified practitioners in the program to research, publish articles, and present at various conferences. Using scholarships and relevant strategies acquired through her courses at USM, she aims to change the trajectory of how diversity, equity and inclusion are perceived and promoted in student learning, faculty and staff retention and leadership. Flynt’s ultimate goal is to use her education and experience to rise in leadership and secure a position as president of a college or university. By working diligently on her degree, participating in the networking, mentoring and professional development opportunities offered by the Tillman Fellowship program, and continuing to empathize and guide students who cross her path, she is on the right track. to make a difference.

For more information on the Tillman Scholars program, visit pattillmanfoundation.org. To learn more about the USM School of Education, visit usm.edu/education.